In the last decades, the wind energy became more attractive to Romania, and thus many resources are allocated to develop the energetic systems based on wind energy.

A different approach for enhancing the performance of Vertical Axis Wind Turbines (VAWT) for the use in the urban or rural environment and remote isolated residential areas is developed in this study.

Recently the small VAWT became more attractive due to the major advantages of this type of turbines in comparison to the horizontal axis wind turbines.

By adding a second set of blades (3 x 2=6 blades) that following the rules of biplane airplanes we aim to enhance the overall performance of the VAWT.

The model has been made to operate at a maximum power in the range of the TSR between 2 to 2.5.

The performances of the VAWT were investigated numerically and experimentally to justify the new proposed design.

This mechanical energy can be valued using one or more generators.

The pitch-plunge motion may be passively or actively controlled by the driving elastic system and by flap and/or slat controls (to maintaining the self-oscillation phenomenon).

Gaining energy from an air flow is a well-known (aero elastic) phenomenon for the aircraft engineers. Taking into account an aerodynamic profile freely oscillating in two directions (one bending or translation and one rotation, referring to a fixed point within the profile), and if between the bending motion (w) and the rotation motion(α) there is a 900 shifting when lift is oriented along the motion, then the work completed by the profile during the entire cycles is positive, thus the profile is extracting energy from the air flow.

The phenomenon is known as flutter and occurs on lifting surfaces under specific conditions reflected by the structural bending and torsion elasticity (Fig. 1). 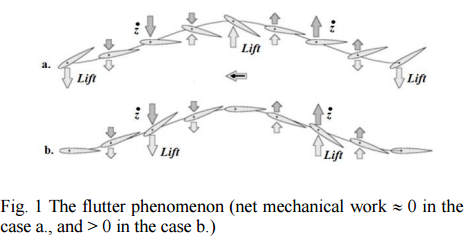 Further, the proposed system has the following advantages: the manufacturing of the blade is simple (straight blades); the phenomenon of self-oscillation will increase the amount of energy extracted from the wind; – the use of an elastic support system (mechanical) which allows for self-oscillating; the axis of the system is vertical, the weight of the oscillating blade being supported by a passive magnetic suspension system (a solution to reduce the friction in the supporting system); the use of passive systems to amplify the self-oscillating phenomenon to obtain large magnitudes required for increased energetic efficiency; a simple mechanical system used for transmitting of the motion to the generator (linear or rotational generator); a system for direct active control (the evaluation of the system being assessed using accelerometers and/or displacement sensors); the state estimator and the controller will be designed in such a way that the functionality of the systems is assured; the control is implemented with an adaptive microprocessor/ microcomputer.

Urban area placement of a VAWT

It is well-known that typically the wind flows by the minimal drag path through or over obstacles such as buildings, trees, etc. The borders of these obstacles, i.e., the straight edges of buildings, lead to increased wind speeds of up to 2-3 times the wind speed value of an unperturbed flow. 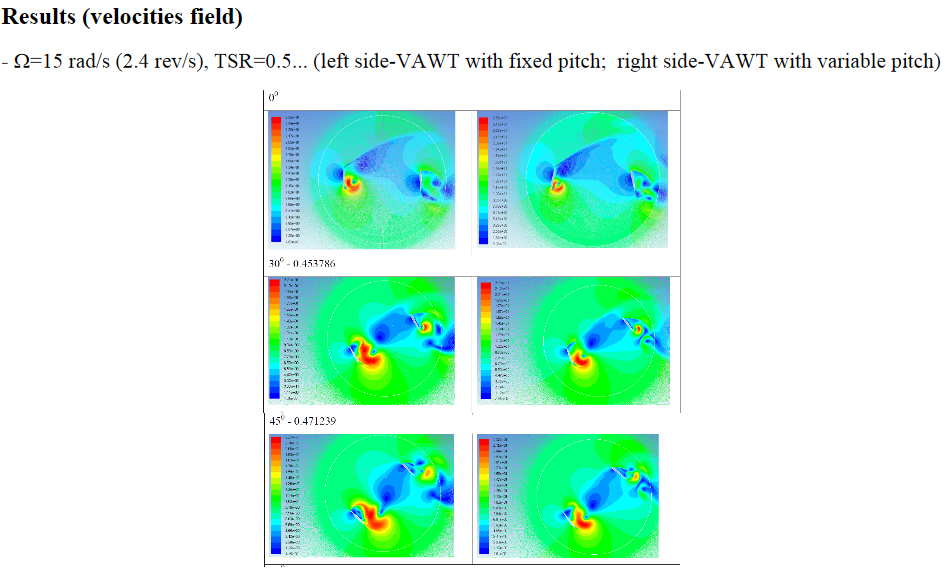 It is a really interesting solution for small VAWT of 1-5 kW.

Call us today and we will help you build a solution designed with your business in mind. We look forward to speaking with you!